Kirk Clayton was a rare sprinter. We were fortunate to witness an individual who was committed to achievement, both, on the track and off the track. Dr. Kirk Clayton persevered and one of his enduring accomplishments was the “spark” to ignite this website. The inquisitive Dr. Clayton asked a question when he was enshrined into the Greater New Orleans Sports Hall of Fame. Where are the other athletes from the Louisiana Interscholastic Athletic and Literary Association (L.I.A.L.O.)? He answered the question by exclaiming, “I was not the only one. There were other great athletes”.

In his honor this webpage displays some of his high school accomplishments.

Recognition of achievement was made by Southern University of New Orleans in 1968 for athletic accomplishments for schools in New Orleans and the surrounding area. Coaches were recognized as well. This program can be found in the History Section of Significant Notes on the Menu Bar.

Coach Wilbur Flanagan: The Tiger A tiger does not change its stripes, however, no one said a tiger never changes its colors. Coach Flanagan performed as a blue and white tiger at DeSoto High School, a black and gold tiger at Grambling State University and a blue and white tiger at Charles H. Brown High School. All of these tigers were fierce competitors and champions by their deeds. Regardless of their colors, the stripes remained and the legacy did not change. Finally, Grrrrr! Let’s listen to Coach Flanagan.

Principal Jesse Bilberry was a student at Union Parish Training School who realized a very successful career as an administrator at Tensas Rosenwald High School. He idolized his father and followed in his footsteps as a principal. In a two-part interview series, Principal Bilberry discusses his life, his path toward molding the character and the intellect of young African Americans who became productive citizens of the United States. These former students regularly meet in various cities throughout the United States as alumni of Tensas Rosenwald High School. This proud tradition is exemplary of gratitude to a legendary figure in their lives, Principal Jessie Bilberry.

This year marks the 50th Anniversary of the mass closure of the African American high schools in Louisiana. Prior to 1970 there were approximately one hundred eighty-five high schools throughout the state and their classification ranged from single A to triple AAA. Their affiliations extended through the various religious denominations in the beginning to the publicly funded schools near the termination of the era of the African American high school. All has not been lost since 1970. Approximately fifteen historically African American High Schools presently exist.

This year marks the third anniversary of AfricanAmericanHighSchoolsinLouisianaBefore1970.com.  This website expanded from an idea to preserve the history of the LIALO to exceeding 30,000 pages of information that would otherwise be found at our local waste disposal sites. We are preserving this information which includes a wide array of sources and types: histories of school’s origin, mascots, alma maters, historical markers, coaches, yearbooks, class histories, newspaper articles, state department records, class roles for entire schools and published books.

A noteworthy effort, History of Central Colored High School, 1917 to 1949, the ten-year effort of Mrs. Gwendolyn Deloris Swinton, was placed on the site under the Central Colored High School banner. The book is a collection of information of this institution that paved the way for African American students in much of Caddo Parish and northwestern Louisiana corridor for thirty years. The time of its existence was short-lived, however, the Phoenix, Booker T. Washington High School rose from the ashes. The old Central Colored High School building stands today as a testament to its legacy. Mrs. Swinton’s book documents how education for the African American high school student was meant to be. There was a dedicated and well-educated faculty and a hungry community striving to succeed in life. The graduates subsequently dispersed throughout the world proud to be from the school and became aspirational leaders in the world community. The youngest graduates are now older than eighty-eight years old and only a few are alive today. We must not forget their experiences and their contributions to our existence. Interestingly, after another twenty years the youngest graduates of an African American high school from the era before 1970 will be eighty-eight years old. There will be few of us alive at this time in the future and we, too, desire to be remembered. 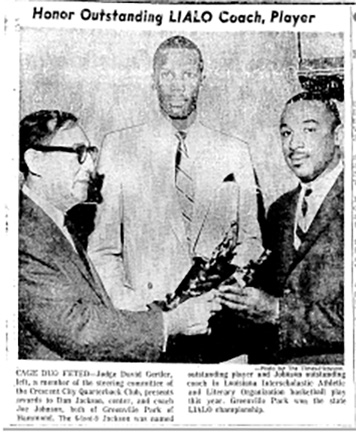 Newspaper Articles regarding LIALO activity were added for 1968. The articles are from the Advocate and the Times Picayune Newspapers.  These two newspapers covered the southern parts of Louisiana with largely urban exposures in Baton Rouge and New Orleans. The articles are ordered by the month and chronologically within each month.  Unlike in previous years,  there was more attention paid to the African American high schools with major media coverage. Younger  readers will find this information quite informative and for individuals who attended these schools, it will remind them of yester years.

Southern University is significant in Louisiana history because it provided an avenue of higher education attainment for many African Americans who would not have had the opportunity due to segregation of the races. The State Legislative Act 87 incorporated the institution. Its doors opened in March 7, 1881 in New Orleans, Louisiana. The University existed there until Legislative Act 118  closed the New Orleans location and established a new Campus on Scott’s Bluff in Baton Rouge. The original charter was retained.

The March 9, 1965 edition of the Southern University Digest was dedicated to the history of Southern University after its move to Baton Rouge, Louisiana in 1914. An interesting editorial questioned the exclusion of thirty-years from its existence. The entire newspaper was presented to let the reader get a situational glimpse of the facilities, the Vietnam-era times and our thoughts at that time.